General information
Turkey, known officially as the Republic of Turkey, is an Eurasian country that stretches across the Anatolian peninsula in western. It is bordered by eight countries: Bulgaria to the northwest; Greece to the west; Georgia to the northeast; Armenia, Azerbaijan and Iran to the east; and Iraq and Syria to the southeast. Eastern Turkey has a more mountainous landscape, and is home to the sources of rivers such as the Euphrates, Tigris and Aras, and contains Lake Van and Mount Ararat, Turkeybs highest point at 5165m.

In early March 2008 we (my wife and me) visited the area shown on the map. A circle route starting and ending in Antalya. We just hired a car at Antalya and looked for resonable hotel/accomadation on our way. We first headed for the famous Pamukkale near Denizli, which is possible to reach in one day. The other destinations where (in order) Fethiye (+Kayakoy), Kas (+Kaputaş Beach), Elmali, Finnike, Kumluca (up into the mountais toward Altinyaca), Kemer and back to Antalya. A wonderful trip with lots of intersting places and some nice plants. 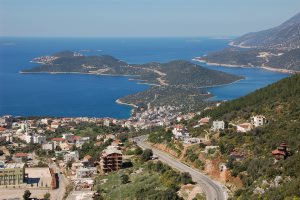 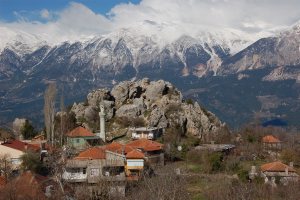 Antalya
Antalya is a city on the Mediterranean coast of southwestern Turkey and an ideal starting point into several directions. It is the capital city of Antalya Province. Antalya has a Mediterranean climate. Situated on a cliff over the Mediterranean (almost all tufa!), Antalya is surrounded by mountains. Developments in tourism, starting in the 1970s, transformed the city into an international resort. The old city, near the harbour is wel worth a visit and you can find nice hotels in this area. 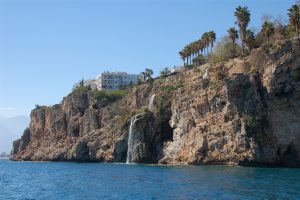 Pamukkale
Pamukkale, meaning cotton castle in Turkish, is a natural site and attraction in south-western Turkey. The ancient city of Hierapolis was built on top of of it.The Pamukkale which is in total about 2700 meters long and 160m high, can be seen from the hills on the opposite side of the valley in the town of Denizli, 20 km away. The water from one of nearby hot springs, with its large mineral content (chalk in particular) created Pamukkale.The water contains large amounts of hydrogen carbonate and calcium, which leads to the precipitation of calcium bi-carbonate (travertine / tufa). Every second 250 liters of hot water arises from this spring, precipitating chalk every second. In the course of time some sources dried up because of earthquakes, while new ones arose in the neighbourhood. The effect of this natural phenomenon has left thick white layers of limestone and travertine cascading down the mountain slope resembling a frozen waterfall. One type of these formations consists of crescent-shaped travertine terraces with a shallow layer of water, lying in a step-like arrangement down the upper one-third of the slope, with the steps ranging from 1m to 6m in height. The other form consists of stalactites, propping up and connecting these terraces. Fresh deposits of calcium carbonate give the site a dazzling white look. Pamukkale is a real tourist attraction and recognized as a World Heritage Site together with Hierapolis. A few other places in the world resemble it, including Huanglong (also with large tufapools) in Sichuan Province of China. (see IMAGES MY TRAVELS Sichuan 2007) 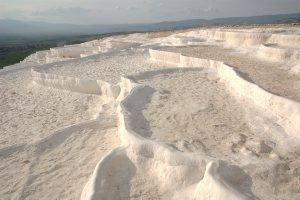 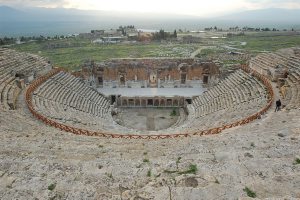 Before the World Heritage designation, Pamukkale went unprotected for decades in the late 20th century and hotels were built on top of the site, destroying parts of the remains of . Hot water from the springs was taken to fill the hotel pools and the waste water was spilled over the monument itself, turning it brownish. A tarmac road ramp was built into the main part. People walked around with shoes, washed themselves with soap and shampoo in the pools and rode bikes and motorbikes up and down the slopes. Officials made attempts to restore the site. The hotels were demolished, and the road ramp was covered with artificial pools which today are accessible to bare-footed tourists, unlike most other parts of the site. A small trench was carved along the outside of the ramp to collect the water and prevent it from spilling. The brownish parts have been left to be bleached by the sun without being covered by water to diminish the problem. Therefore many pools are empty. Others parts are covered with water for an hour or two, on a rotating schedule. 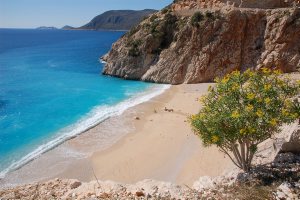 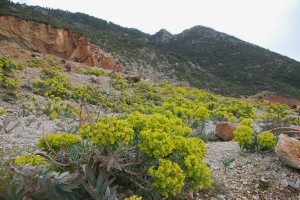 Kaputaş Beach
Kaputaş Beach, one of the best in this area, is situated at a distance of 20 km from Kaş and 7 from Kalkan, at a point where an extremely narrow valley towered by steep cliffs and forests joins the sea shore in the cove of the same name as the beach. The beach is quite popular among visitors to the region due to its untouched natural beauty (sandy beach and deep blue sea) commanded by a view from the heights traversed by Kaş-Kalkan road. There are no fixed amenities in Kaputaş Beach, with only ambulant vendors who set up small stands selling snacks during the day. The beach is reached by stairs descending from the road and is guarded by the municipality of Kalkan. 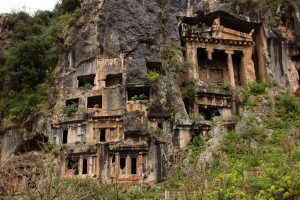 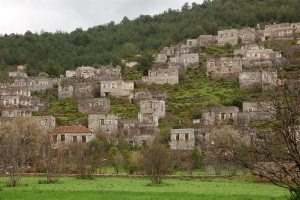 Fethiye
It is one of Turkey s well-known tourist centres and is especially prized during the summer.
Just on the outskirts of the town you can find many relics of the Lycians remain visible today, especially their distinctive rock-cut tombs in the sides of cliffs in the region.
Kayaköy is a village 8 km south of Fethiye where Anatolian Greeks lived until approximately 1923. The ghost town, now preserved as a museum village, consists of 3500 of rundown but still mostly intact Greek-style houses and churches which cover a small mountainside and serve as a stopping place for tourists visiting Fethiye and nearby Ölüdeniz. Its population in 1900 was about 2,000, almost all Greek Christians; however, it is now empty except for tour groups and roadside vendors selling handmade goods and items scavenged from the former village. 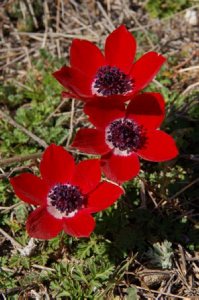 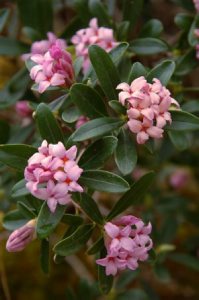 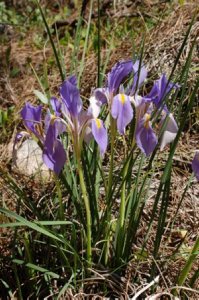