I started my rock garden in 1988, beginning with the front garden, then the alpine house, and later built the tufa wall and tufa column. I started to build the back yard rock garden when our children had grown up a bit and after I finished building the garage and cellar.

In spring 2003, I put some very large tufa rocks in my front garden. I drilled many holes in the stones with a hollow water-cooled diamond drill. The holes have a diameter of 25mm and were drilled as deeply as possible, sometimes completely through the stones. The tufa rocks which I have used are harder then the ones I first used, and the harder stone has many advantages. The plants grow well and the stones are not covered as quickly with moss, a problem that arises  frequently with the softer tufa rock. (see tip below) 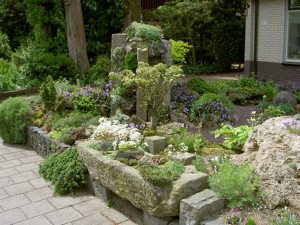 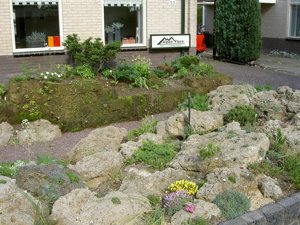 All the stones have been laid against each other in such a way that it seems you are looking at one large piece of tufa rock. Plants are grown not only in crevices between the individual rocks, but also directly into holes drilled in the stones. I never plant the stones all at one time. Each time I have a particular plant or rooted cutting, I plant it in the tufa rock. In addition, I also blow seeds directly on the tufa. I place seeds in my hand and blow them in the direction of the tufa rock where I think would be the best place for the seeds to germinate and grow on. Using this method, I have already grown a lot of healthy plants in this difficult situation, but its apparently one that is very good for the plants.

Species which I have sown so far in this manner are: all types of Kabschia Saxifragas, the silver rosette Saxifragas, with Saxifraga longifolia as one of the best, Gentiana terglouensis, Edraianthus pumilio, Edraianthus serpyllifolius, Physoplexis comosa, Petrocallis pyrenaica, several campanulas, such as Campanula cenisia and C.barbata, Rhodothamnus chamaecistus, Ramondas of all types and colors, Jancaea heldreichii, different species of Draba, Dianthus, etc. Sowing directly on the stone generally gives good results after only two years. Germinated plants grow very slowly and frequently struggle to survive, but the plants which survive are generally strong and stay nicely compact. 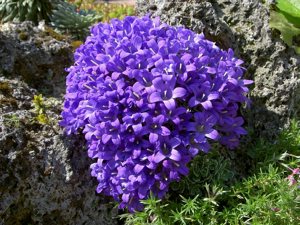 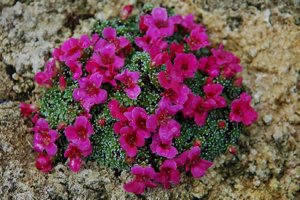 All stones in the rock garden are placed on a thick layer of sharp sand, so there is excellent drainage. Where I live on the ‘Veluwe’, there is very sandy soil and drainage is not a problem. Between the stones and in some larger open areas in the rock garden I used a soil mixture of leafmold, tufa dust and some fibrous loam in a layer between 15-20cm thick. This is a good growing medium for most plants. Plants with large root systems will grow their longer roots directly into the sharp sand under the soil mixture.

A few times a year I hose the whole garden, including all the tufa rocks with a liquid fertiliser like Miracle-Gro. The entire rock garden is top-dressed with granite chips so the ground remains as cool as possible and as a result the rock garden doesn’t dry out too rapidly in the summer. I also made a small stream in the backyard and this stream is fed by a submersible pump which lies in a 1000 liter tank.