Tajikistan is a mountainous landlocked country in Central Asia. It is bordered by Afghanistan to the south, Uzbekistan to the west, Kyrgyzstan to the north, and China to the east. Pakistan lies to the south separated by the narrow Wakhan Corridor.

Tajikistan consists of 4 administrative divisions. These are the provinces of Sughd and Khatlon, the autonomous province of Gorno-Badakhshan (abbreviated as GBAO), and the Region of Republican Subordination.

Tajikistan is covered by mountains of the Pamir range and more than fifty percent of the country is over 3000m above sea level. The only major areas of lower land are in the north (part of the Fergana Valley), and in the southern Kofarnihon and Vakhsh river valleys. 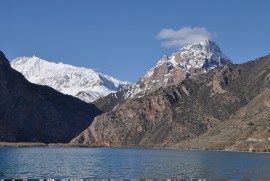 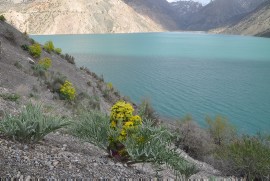 To the north of Dushanbe lies the beautiful lake, Iskanderkul, covered in legends related to the name of the Alexander the Great. The lake is located on the territory of the mountain-forest reserve “Iskanderkul” at 2195m above the sea level. 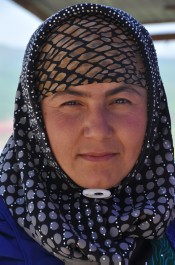 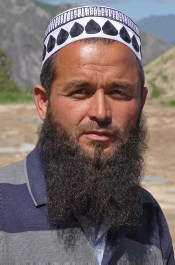 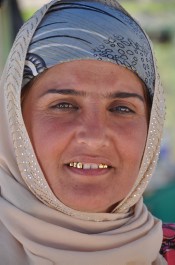 The climate of Tajikistan is moderate, sharp continental and dry. It is subtropical in low valleys, and cold in high mountains. In the high mountains of Tajikistan there are great supplies of ice and snow. Winter temperatures in valleys are from 0°C to +2°C, high in the mountains – to -27°C. In summer temperature in the valleys is from +23°C to +30, +35°C, in the mountains – from +4°C to +15°C. The most precipitation falls in winter and spring. 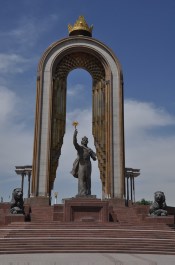 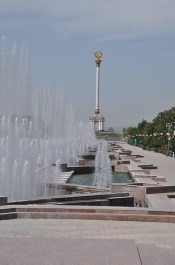 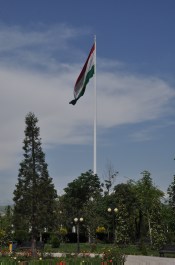 Dushanbe, the capital city of the republic, is located in the Hissar Valley in the south of Tajikistan and one of the main attractions of Dushanbe is a 165m long flagpole, raised on the left side from the Palace of Nations. The flagpole entered the Guinness Book of Records; the first flag was raised on 24 May 2011. 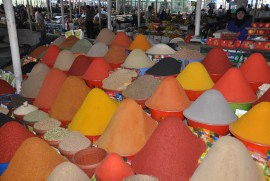 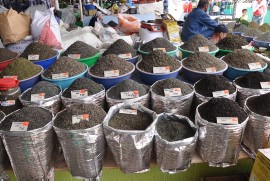 The Pamir Mountains are a mountain range in Central Asia at the junction of the Himalayas with the Tian Shan, Karakoram, Kunlun, and Hindu Kush ranges. They are among the world’s highest mountains.

The National Park “Pamir Mountains”, an UNESCO World Heritage site, is located in the eastern part of Tajikistan. The park having a territory over 2.5 million hectares, is located in the heart of the Pamir with the highest mountain ranges of Eurasia divaricated from it. It is home to Tajikistan’ rare mammals as the Marco Polo sheep, snow leopard and Siberian ibex.

Here is also one of the highest car passes in the world, the Akbaytal pass (4655m). 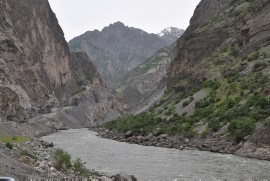 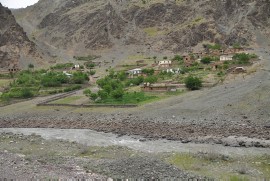 The Panj river is formed between the Hindu Kush and the Pamir Mountains by the junction of the Vākhān River and the Pamir River along the border between eastern Afghanistan and Tajikistan. The climate of the Panj River valley is arid, averaging less than 200mm of precipitation per year. Annual precipitation is much greater, more than 700mm in the surrounding high mountains, which provide most of the water flowing to the Panj.

The Anzob Pass to the south, about 90 kilometres north of Dushanbe at roughly 3400m, is one of the most treacherous mountain passes of Central Asia. On October 23, 1997, an avalanche killed 46 people, burying 15 trucks and cars. The avalanche was so large that it took two weeks for the rescuers to reach the victims.

Due to the importance of the route connecting the north to south and its level of danger, the 5km Anzob Tunnel was built, completed in 2006. Construction was delayed due to electricity faults and other problems.

The tunnel is still a building site and is currently filled with water, car exhaust, and broken-down construction equipment. The road surface itself contains potholes large enough to break an axle. A solitary fan in the middle tries to move some air, but the exhaust is so thick you can only see just 1-2m in front of the vehicle. A breakdown in the tunnel could easily result in serious illness or death from carbon monoxide poisoning. From my own experience in 2015 I can tell you, it is a nightmare to go trough it! 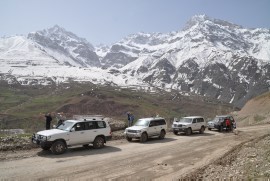 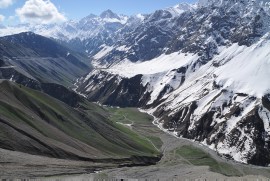 Nature of Tajikistan, when it comes to flora is highly diverse and there are some very fine areas to botanise. Around Dushanbe you can explore the Varzob- and Rommit Valley (between 1250-1800m). Both full with treasures like Iris vicaria in various shades from pure white to pale blue, Tulipa praestans, Fritillaria eduardii, Fritillaria bucharica, Anemone petiolulosa and Dionysia involucrata. Different plants can be found on the Ansob pass around 2400m. In the end of April, beginning of May you can find here Corydalis ledebouriana, Adonis turkestanicus, Iris vicaria, Tulipa hissarica, Tulipa praestans, Gymnospermum albertii, Scilla cf. vvedenskyi, Colchicum kesselringii, Crocus korolkowii and several species of Gagea. 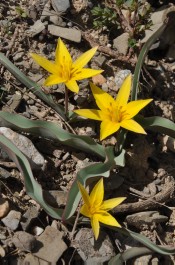 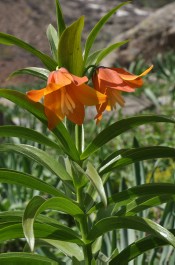 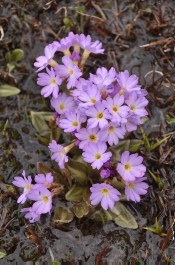 To the west of Dushanbe is the Shirkent National Park, another good area to botanise. If you want to see thousands of Iris bucharica, this is the place to be. Other plants which can be found are Eminium albertii, Arum korolkowii, Geranium charlesii and Tulipa carinata. 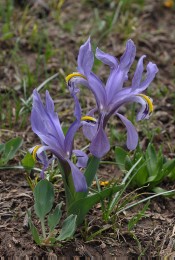 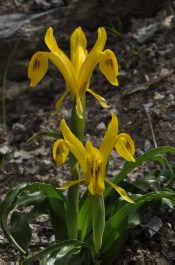 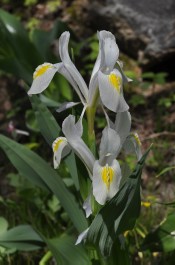 More south, near Kulob, you are able to explore at Langar on the Hazrati Shoh-range.

An area with completely different plants as seen around Dushanbe. Here are fine populations of Iris nicolai/popovii, Colchicum luteum, Anemone bucharica, Scilla puschkinioides, Primula kaufmanniana and Adonis turkestanicus. If you follow the Panj river along the Afghan border fine populations of Cercis griffithii, Eremurus stenophyllus and Gentiana olivieri can be spotted. 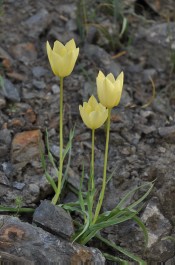 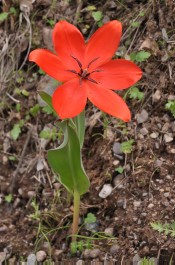 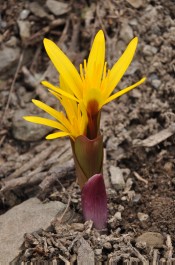 The beautiful Sagirdasht pass (3200m) near Kalaikhumb (in the GBAO) is not always open in the end of April and often closed due to the high snow fall in winter. If it is open it is a very good place to botanise. Deep yellow Iris bucharica, Tulipa battalinii, Tulipa linifolia, Tulipa turkestanica, Tulipa anisophylla (very dwarf), Chesneya hissarica, Anemone erantioides, Primula auriculata, Colchicum luteum and Vinca erecta are native here. 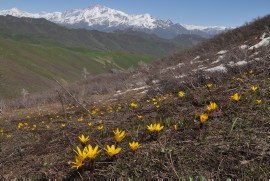 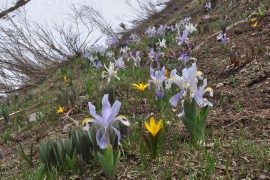 In all Tajikistan is a beautiful country with very friendly people. The roads are not always that good and I advise to use a 4×4 jeep to travel.